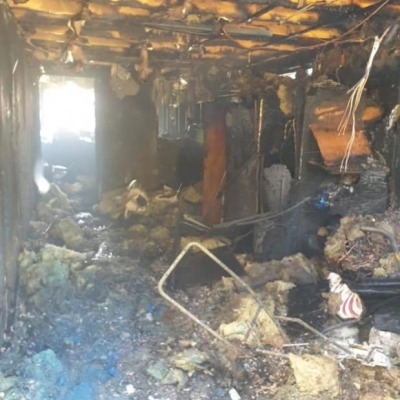 Members of Thirsk Falcons football club have been left devastated after thousands of pounds of children’s kit and equipment was destroyed in a suspected arson attack.

The fire at Thirsk Falcons’ base at Thirsk Racecourse broke out in the lock-up for the junior section at about 1pm on Sunday and passers-by said they had filmed two teenagers running from the scene.

Under-16s coach Gary Wood said the lock-up had a huge amount of equipment built up over a number of years that volunteers had fundraised for or local firms had donated to the club, which has about 370 members.

He said: “This will unfortunately have an effect on our junior teams the most in what is an already difficult time. This is a huge setback for the club as they look to expand to new levels in the new season.”

The lock-up was used to store equipment for the under-7s to under-14s teams as well as house some sentimental items, such as boards and pictures, footballs, goals and line-marking equipment.

Despite the efforts of firefighters, the structure was left a blackened shell.

Mr Wood said: “People have been horrified by this. We had it vandalised about two months ago, so we’d locked it up properly before lockdown to make sure that everything was safe. Now everything has gone. Vandalism is one thing, arson is something else.

“There is a cafe next door to the lock-up with gas cannisters, so if the fire had spread, the firefighters could have lost their lives.”

Arsonists are being blamed for a fire which has devastated members of Thirsk Falcons football club. Picture Gary Wood

While the club is seeking volunteers to help clear up the mess left by the fire, members said it was even more inconvenient as it had come just weeks before the club was due to move to the Sowerby Gateway Sports Village.

Those responsible for the fire have been condemned by scores of people on social media.

North Yorkshire Police has launched an investigation into the fire.

To help the club, which was established in 1948 and has 21 teams starting at three-year-olds, replace the estimated £5,000 of equipment lost in the fire a crowdfunding drive has been launched and has reached more than £2,000 in a day.